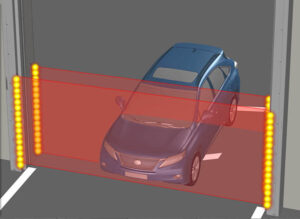 The new Rytec SmartSurround™ Advanced Detection and Alert System uses next-generation pattern recognition and advanced traffic-sensing technology to enhance doorway safety. It enables Rytec Spiral® doors used in auto dealerships to intelligently detect and respond to a variety of traffic scenarios while providing a more aesthetic solution than most other sensors and signaling systems.

This list of FAQs takes a deeper dive into SmartSurround, including what makes it unique, the problems it solves for auto dealers and how it improves their operations.

What is the significance of SmartSurround? How does it advance door safety?

SmartSurround utilizes artificial intelligence (AI) and advanced light curtain sensors to track traffic entering and exiting the door threshold and adjust the operation of the door and alerting systems accordingly. That enables it to detect and respond to a vehicle that may be blocking the door threshold, a pedestrian wandering into the doorway and other scenarios. This intelligent system increases door awareness and improves operational safety in auto dealerships.

Existing overhead sensors require set-up and are subject to installation limitations, which can result in compromises to their coverage effectiveness. Additionally, some advanced sensors monitor areas of the facility’s usable space that often are significantly larger than necessary. This can result in “false positives.” As vehicles, pedestrians or workers pass nearby, these sensors may detect them and open the door or hold the door open, even though they’re not moving through the door opening or remaining near the field of door operation.

What problems does SmartSurround solve for auto dealerships?

How can dealers justify an investment in SmartSurround?

Most dealers recognize the challenges created by busy service lanes, such as:

What capabilities does AI give to SmartSurround? How is it “smarter” than previous door safety devices?

The AI software uses data gathered by the SmartSurround sensors to assess the traffic type and movements through and near the doorway. It uses this data to determine which alerting lights are most appropriate and what movements the door should make.

The alerting system of SmartSurround utilizes a variety of light colors, flashing rates, brightness and animations like cascading patterns to clearly communicate what the system is seeing and what the door is doing. These signaling lights are visible from nearly any angle regardless of door position for improved safety.

What are several examples of the types of AI profiles that customers can set up using SmartSurround?

First, the system can recognize when the door is called upon to open and does so, but the doorway goes “unused.” In other words, a vehicle didn’t pass through the door threshold as expected. This results in the alerting system presenting a different light sequence. It also commands the door to close at less than half of its normal speed, giving nearby drivers or pedestrians adequate time to move away from it.

Second, the integration and evaluation of the light curtain beams allow SmartSurround to recognize whether the traffic that entered the doorway is the same traffic that passed through to the other side of the doorway. It does this by comparing which beams were blocked and the duration of their blockage. This data helps the system identify the shape of the traffic or object. When that isn’t clear, the door can react by signaling and also by closing slowly.

Third, if a tall delivery vehicle attempts to enter the service area through an overhead door, the driver may not be aware that the door hasn’t completely opened. That can result in a collision and can damage the door. The SmartSurround system can detect the approaching vehicle, determine its shape and activate a special set of visual warnings that signal the driver to stop and wait until the door has fully opened.

How does SmartSurround provide advanced traffic sensing abilities that are superior to existing door safety systems?

It does so by recognizing if or how the traffic has passed through the doorway. Did it do so in a normal or expected way? Examples of abnormal scenarios may include:

Most devices today are individual components with limited functionality. Most sensors can detect movement at the door threshold. But they are limited to a single or dual output signal, which gives the door controller very little insight as to what’s happening at the door opening. For example, previous door sensors and control systems can’t indicate if the vehicle has fully cleared it.

SmartSurround packs a lot in a compact package. Do door safety devices tend to take up a lot of room around the door threshold?

A system like SmartSurround hasn’t existed in the commercial high-performance door industry until now. The best previous solution would have been to install separate light curtain sensors and alerting light strips, which would take up significantly more room, would not be as aesthetically pleasing and wouldn’t provide the desired functionality.

The SmartSurround system housing is approximately half the size of a typical alerting light system alone. If you add the sensors, then it’s significantly more compact.

Why do auto dealers like the new slim profile light curtains that are part of the SmartSurround system?

Most auto dealers place a high value on aesthetics. They tend to frown upon devices that protrude from building surfaces. Instead, they prefer compact and integrated designs that provide the required functionality without being obtrusive. The slim profile light curtains mount nearly flush to the door threshold for a clean, modern look.

If I’m an owner of a car dealer or an architect building a new facility, why should I specify SmartSurround?

It’s an intelligent, state-of-the-art “near-door” activity sensing and alerting system that will enhance both your customer experience and your operations. It elevates detection, warning, signaling – and door safety – to a new level.

Get details, watch our product video and learn more about SmartSurround here. 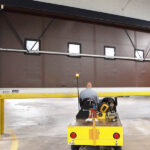 One way to help ensure safer warehouse operations is to specify high-performance doors. Here are some of the ways they improve productivity and safety. Rytec’s Sure-Seal® door is designed for AS/RS applications. It can be tightly integrated with warehouse automation systems for maximum efficiency. 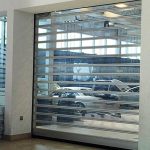 A Myriad of High-Performance Door Options for Your Auto Dealership

Here are five areas of modern auto dealerships where high-performance doors can enhance the customer experience and help you streamline operations.